Food, Tried It, TV, Wore It

It’s been a great week! While you all know my heart belongs to Backstreet Boys (#BSB4EVA) I must admit that when Boys II Men came to perform at work this week, I did have a fan girl moment (or ten). It was like 90s on 9 (only the best radio station EVER) jumped out of my car and into real life.

What do you wear when you know you will be in the presence of The Boyz (who are now very much men)?  I knew I HAD to rock my Azeeza Michigan T– Because  Well, I’m from Motown The Boyz are from Philly and together we make Motown Philly… yes, I’m cool like that.

The Boy (as in my boyfriend, not one of the Boyz) also happens to be from Philly. Coincidence that we make up one of the BEST songs to come from the 90s as a couple? I think not. (Fun Fact: when I told Boyz II Men that 1) I wore this shirt on purpose so that as a whole we would make up Motown Philly and 2) That My song with The Boy is in fact Motown Philly they weren’t all that amused…)

Then the next day, I got to produce Carlton Banks!! (aka Alfonso Ribeiro) and his partner Witney Carson who are killing it on Dancing with the Stars. 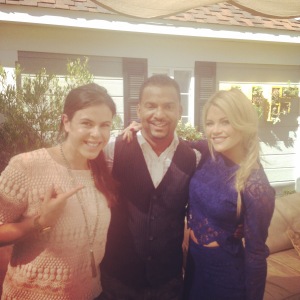 And while we are on a fun 90s throwback streak… let’s discuss 90s snacks. One of my favorite snacks when I was a kid was Cheese Its. Sure they were florescent orange and artificially cheesey but that is precisely  why I loved them so much! (Although I hated the white cheddar ones. Those (and anyone who liked them) were gross)

Well as it turns out, one of my fav paleo bloggers and cookbook authors, Danielle Walker, of Against All Grain, makes a paleo version! AND she came into work this week too!  Clearly this was all meant to be.

I was so excited to meet Danielle because her story is truly inspiring. She suffers from an auto immune illness and was incredibly sick but cured herself entirely by eliminating white sugars, grains, dairy etc from her diet. I find it incredibly empowering that she took her health into her own hands and now inspires people to do the same. SO many people don’t realize that what they are eating is what’s making them sick and that many times medicine is just covering up the symptom, not the root of what’s making you feel so terrible.

She was as sweet as can be and her food is amazing too!

So this week, I attempted her recipe for cheese crackers/aka Paleo Cheese Its!  I started with my ingredients: 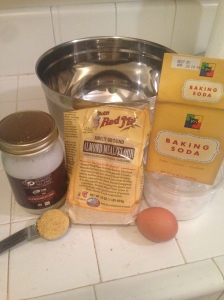 2.5 tablespoons of Nutrtional Yeast (it gives food a cheesey taste… without you know, cheese.) 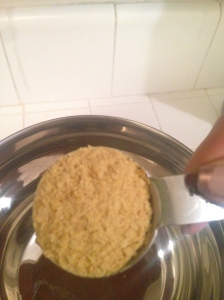 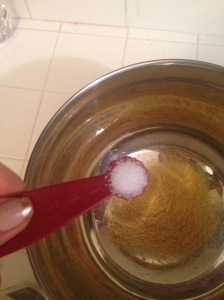 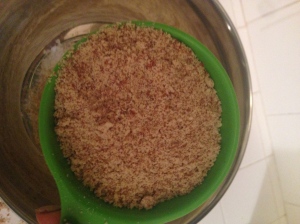 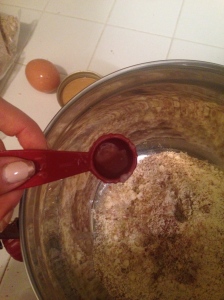 Mixed it all up for about 40 seconds until it became like a dough:

Put it parchment paper and shaped it like a ball: 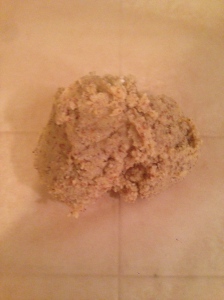 Put another piece of parchment paper on top and looked for a rolling pin… turns out I don’t have one. Based on my kitchen inventory, I was a bit surprised. But I settled on using the wandy thingy from my Vitamix: 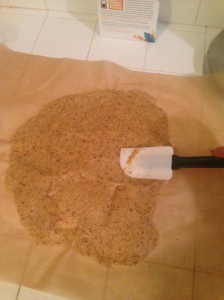 Then I cut them into cracker shapes! 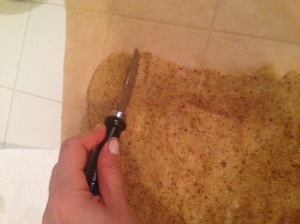 and stuck a hole in the center… JUST LIKE CHEESE ITS! 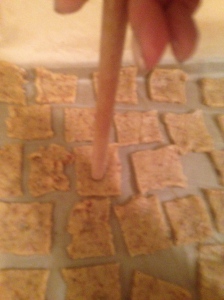 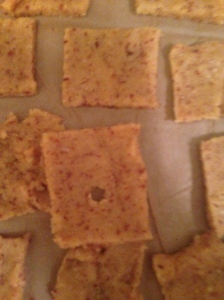 And I baked them in the oven for about 12 minutes rotating the pan once: 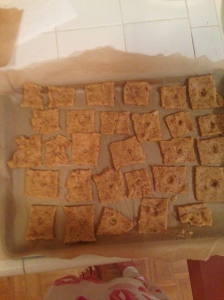 And they came out smelling yummy but looking rather ugly….

Also, since I didn’t have a proper rolling pin some were much thicker than others.

BUT, they tasted great. 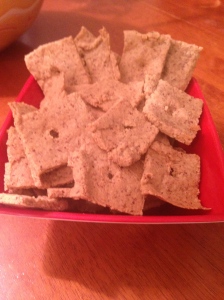 Not like a Cheese It. but like a cheesey cracker and that was good enough for me! Danielle’s pointer when I told her that my crackers came out ugly — was not to use Bob’s Red Mill. Noted. Will not repeat!

Hope you’re having a fabulous #TBT